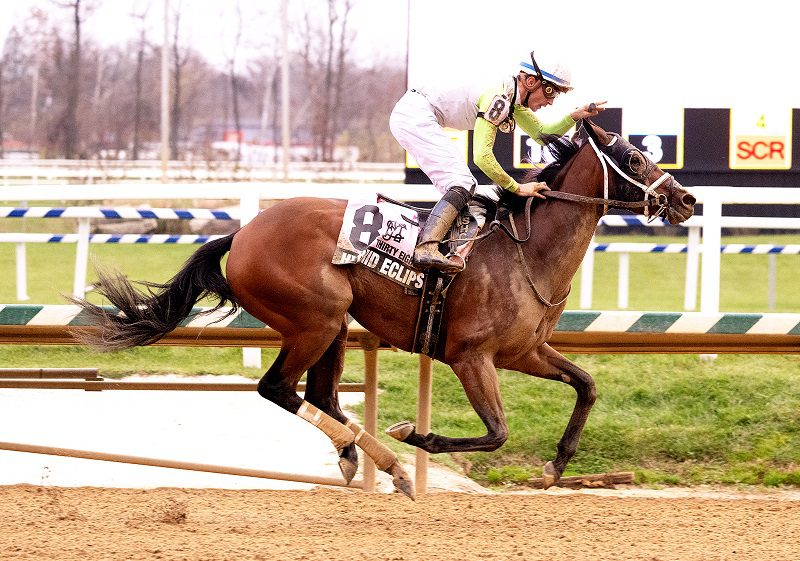 Paynter’s Hybrid Eclipse made short work of her rivals in Saturday’s $100,000 Thirty Eight Go Go Stakes at Laurel, winning the 1 1/16-mile test by three lengths in an impressive performance.
Owned by The Elkstone Group and trained by Brittany Russell, Hybrid Eclipse raced in seventh position early. She raced four deep around the first turn and settled willingly down the backstretch before making a strong move toward the leaders at the quarter pole. She took command in the stretch and defeated Berate by three lengths at the finish, covering the distance in 1:45.05 under Sheldon Russell.

Third behind multiple Grade 1 winner Nest in her previous outing in the Beldame Stakes (G2) on Oct. 9, the Laurel-based runner appreciated competing over her home track. She was scratched from the Nov. 4 Turnback the Alarm Stakes (G3) at Aqueduct in favor of the Thirty Eight Go Go Stakes.

“It just seemed like the smart thing to do,” Brittany Russell said following the facile victory. “She loves this racetrack. She’s done a lot of good here, so it was nice for her to come back and get the win.”

A 4-year-old filly out of the Valid Wager mare Super Plan, Hybrid Eclipse won the Caesar’s Wish Stakes at Laurel and finished third in the Obeah Stakes at Delaware Park over the summer. She was acquired by Stuart Grant’s Elkstone for $107,000 out of the Fasig-Tipton July Horses of Racing Age Sale, and she was bred in Kentucky by Alex Venneri Racing LLC. All told, Hybrid Eclipse has won six of 17 lifetime starts and has banked $361,824.

“I had her for another client, and when she went through the sale and Stuart purchased her, we had some expectations,” said Russell. “She’s doing exactly what we were hoping she would.”
In addition to Hybrid Eclipse, Paynter is also represented this season by graded stakes winner Miss Leslie, winner of the Delaware Handicap (G2), and stakes winners Payntdembluesaway, and Breeze Rider.